Justice Means Jailtime and I Want NISSAN Executives and Those in Williamson County to Wear Orange Jump Suits... Society is Harmed by the Cronyism and Corruption in Tennessee

The banks need to foreclose on the NASHVILLE Symphony... It represents elitist cronyism...  NISSAN gave them 1/2  MILLION Dollars because French executives liked hanging out with celebrities..... Money was NOT given to needy charities  but Dominique Thormann the man that asked for 1.4 Billion taxpayer dollars for the Leaf EV got "great" box seats.

The Nashville Symphony is FULL of Cronyism and Deserves to Go Bankrupt. Over 3 Years Ago Fiscal Issues Were Exposed on The NISSAN WHistleblowers Blog.  Bank of America Should Take the Keys and Kick the Good Ole Boys OUT... No More Subsidizing the Rich!!! 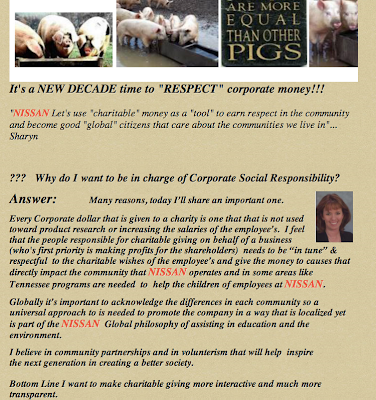 Below was put on my original blog www.GirlintheBlackHonda.com
A person told me that "after" I exposed the Good Ole Boys I'd get the CSR job... so I posted a LOT of thought about how to make CSR better.  I was told that over 50 of my ideas were used.  Sadly I will not get the credit. Still I can prove they were my ideas.  I have web stats from Critical Mass, The Designery and other vendors of NISSAN they read my website and turned my "raw ideas" into reality.  Ask Erich Marx.  I told Tavares to "keep him"... One of his neighbors told me that he was losing his job and then a "miracle"  well the miracles name is SHARYN and I was wrong about his character -He's a piece of shit!!!

Below are "my" Sharyn Bovat's words when I "thought" the executives in Japan would honor their "hand shake" agreement.  I learned that when dealing with NISSAN to "get it in writing"... luckily I have emails that show "some deal" was made... The Feds have probably already read them:):)

One of my viewers said God would punish you and others in the DA's office... I told them I'd rather have it be the FEDS.  You deserve to go to jail for abusing me & ALL the others... People are sending me data and it seems like the NSA gets it at the "same time"... WOW!!! 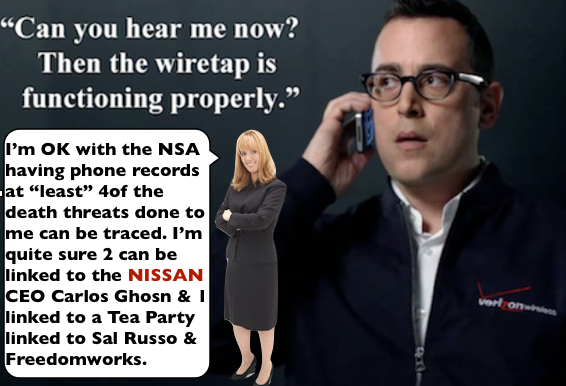 Globally it’s important to acknowledge the differences in each community so a universal approach to is needed to promote the company in a way that is localized yet is part of the NISSAN  Global philosophy of assisting in education and the environment. 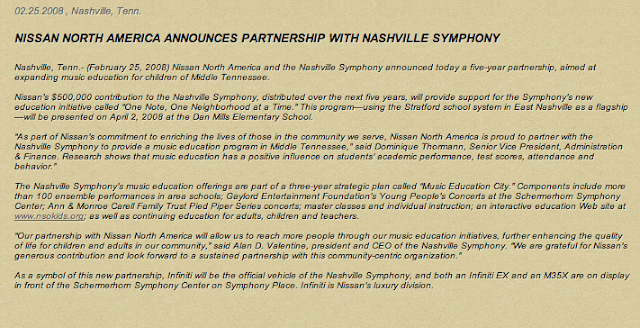 I believe in community partnerships and in volunterism that will help  inspire
the next generation in creating a better society.

$30,000  was given to Haiti which is Fantastic.
$500,000 was pledged to the Nashville Symphony “First Note” program.
I’m not saying it’s a “bad” program but one, the problem is it does not directly impact the children of NISSAN employees that tend to live in Rutherford and Williamson Counties .
From my knowledge  I believe the money was  artfully  “seduced” to  “willing  selfish” executives who had little respect for the charitable dollar.  Yet enjoyed the VIP treatment and the great parties.   Sir,   ???  Maybe you still would have been invited to the fancy parties if you only gave 100K of corporate money.
Nissan’s $500,000 contribution to the Nashville Symphony, distributed over the next five years, will provide support for the Symphony’s new education initiative called “One Note, One Neighborhood at a Time.” This program—using the Stratford school system in East Nashville as a flagship—will be presented on April 2, 2008 at the Dan Mills Elementary School.
~History~
Many years ago the former executive director of the Williamson County Child Advocay Center took me out to lunch.  We met when I attended their annual Legacy Ball.  I had won about a dozen silent auction items and while cutting my check she and I bonded over the need for community involvement that directly impacts a community.  At lunch I heard about how some “charities” recruit corporate dollars in Nashville. Using local celebrities to giving people VIP experiences.   The money goes to pay salaries and administration costs which include “lavish” recruitment tools.

My opinion is the charities in Middle Tennessee that promote volunteerism and truly do the work in the trenches are fighting for every charitable dollar to use for those in need, money they receive is cherished, appreciated,  and used “wisely”.
Those at NISSAN in charge of charitable giving enjoyed the “good life” at the expense of the children of the “average” NISSAN employee.   Their behavior was “piggish”.
I have many examples but I will NOT give them on this website.

This symphony donation was extreme.   The sympony was not "stapped for cash" this money was earmarked for a new program one that does not benifit children of employee's.
I figured out that For JUST 10% of what was given to the symphony I could have put together an after school program that would have given foreign language classes to 800 NISSAN children in Williamson and Rutherford County, for a full year.