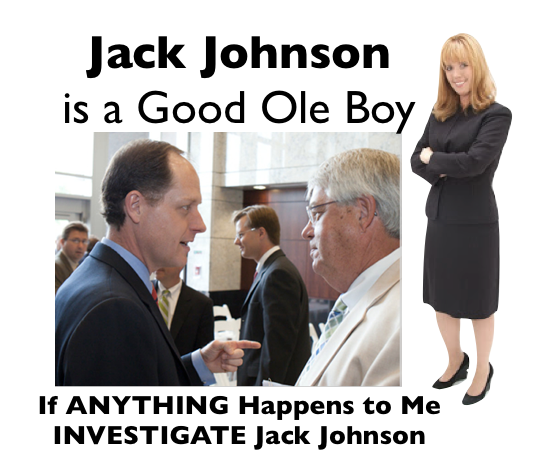 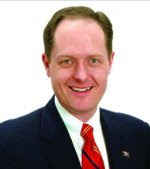 The Feds NEED to Investigate the Tennessee politicians ALONG with NISSAN - Kisber- Farr and others that profited on Green Industiries and wasted FEDERAL money. I Want OUT of this State & Told Mr. Johnson I Want my Reputation Back. If any of the reporters on this email "care" about Tennessee YOU will Investigate.  All I want is for the facts to be exposed. Why does NOBODY care that NISSAN is over 4 Billion in IDB debt and is NOT creating jobs promised?   Bond debt in Tennessee counties is "out of control"  the City of Franklin has a LOT of debt service payments.  Money is being taken away from the schools.

Why did the State of Tennessee give NISSAN 50 times MORE money that other companies bring over the same # of jobs?

Also investigate ALL the others.... it's a LONG list & I've been fighting fraud in Tennessee for OVER 3 years.  I filled out an FBI report when reporting a death threat - NOW I have new names...   Tennessee scares me.

Jack Johnson told me today "you were convicted of trespassing."  He Knows that ALL I've done for 3 years is "rant" about fraud, discrimination & corruption.  Why did he not ask about issues I've uncovered....  I know why - my blogs viewers have told me he's part of the problem.  Some deals were NOT made with the best interest of the taxpayers.

Good people from Tennessee that are tired of the corruption tell me about issues because they want the politicians in this state to be "ethical" they want the courts cleaned up.  Jack Johnson did NOT care about the fraud and wasted spending.  I told him that I was offered money to be silent.  I spoke up because I "care" about people and society.  IF you do NOT want to live in a civilized society then keep standing by Jack Johnson, Lamar Alexander and others.   They are the voice of Apathy and the status quo. It's time for Tennessee to decide what kind of society do you want to live in.  The door is open for ethical people to "insist on change"... Please for the next generation..... go through the door.


Message to Jack Johnson:  Sir- You were "rude to me & the trespassing charge was "sworn out" by a NISSAN executive that wasted taxpayer money.

The crime is = to a "speeding ticket"

Most of you know this but I'm INNOCENT but nobody cares.  I had a lawyer that did NOTHING & lied to me.  The ADA Terry Wood lied.  Judge Jeff Bivins let a case continue one that's not even a crime.   Either he's a "moron" or corrupt.   Judge (Robbie Beal) let most of my subpoenas get quashed (moron or corrupt) - I was NOT able to have a "defense"  my constitutional rights were taken away... & Jack Johnson says to me "you were convicted" YES!!! & I want a retrial.. with a court system that's NOT corrupt- The DOJ told me to file a civil suit against NISSAN - I tried that BUT Judge Easter accepted an affidavit from Terry Wood the ADA who LIED.  He Said NISSAN played no part in my persecution... which is a LIE.  Does ANYONE in Tennessee want the truth?

Jack Johnson YOU are what's wrong with America!!!

Tennessee Deserves to be #1 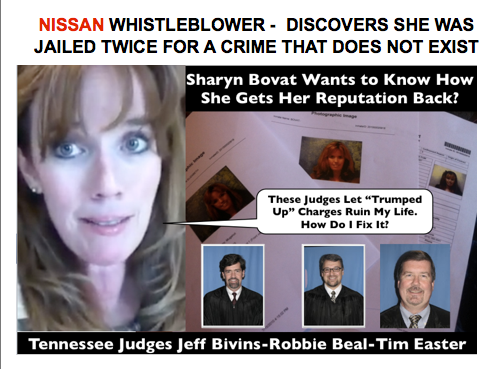 Posted by Sharyn Bovat at 7:19 PM No comments: